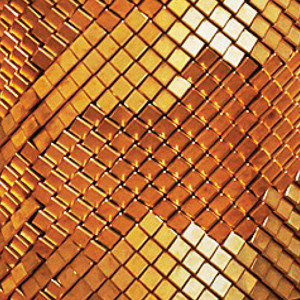 Giles Miller’s task was to come up with an eye-catching look for the front counter of Butlers Chocolate Café in Dublin Airport, run by the Irish-owned luxury chocolate maker. The designers create wall coverings and displays from a variety of materials. They specialize in cutting angles into tiles and other surfaces to let light and shadow create unusual shapes and patterns.

Butlers had seen Giles Miller’s work and wanted a brass finish for its café counter. The designers had produced a brass finish on ceramic tiles before, but they were worried ceramic wouldn’t survive the demands of a busy airport (where bags and luggage trolleys can deliver quite a pounding). So they thought of making metal tiles and started looking at metal manufacturing processes.

What they wanted was a 40mm-square metal tile with a chamfered face, and with one corner 20mm higher than the opposing diagonal—so when it’s rotated the light catches it in different ways. “When we started looking for a manufacturer there were a few other metal-casting companies but Dynacast was the most helpful,” says the designer Kirstie Little, “and the only one able to make the thousands of tiles we needed in the short lead-time we had.”

From drawing board to café counter

The designers made a trip to Dynacast’s UK plant in Welshpool, Wales, where sales manager John Jackson, who, like the rest of the sales team, is also an experienced engineer, gave them a factory tour. “We showed John the drawings and he was really helpful about the processes and what can and can’t be done,” says Kirstie. “He told us how to get the right finishes and how the tiles could be fixed on with a screw system at the back, as they were a bit too heavy to be stuck on. Having John involved right from the start meant everything went a lot quicker.”

For John this was an intriguing project. He knew zinc would be the best metal for the casting as it’s good at taking surface finishes. He also knew the client wanted a uniform brass finish, so after the initial copper coat, he recommended a nickel plating to give a white surface that would take the brass layer well on top.

The tiles were to be fixed onto panels by Giles Miller in its production space before being sent off to the client for installation. The assemblers needed to be able to take any tile out of the box and know the spacing would be absolutely consistent, so it was vital there was no machining variation between the tiles. Dynacast also ensured the plating was even and didn’t build up on sharp edges and corners. No machining marks were allowed to ruin the finish. And a stringent right-first-time approach meant there was no need for subsequent trimming or polishing.

Thanks to great communication between the client, Dynacast and the plating subcontractor, the project was delivered on time in just seven weeks. Kirstie says that Butlers “absolutely loved” the result and they’re in talks about another potential project. At the same time the die cast metal tiles are an important extension of Giles Miller’s product range and the designers have already been chatting to John about other shapes and different finishes such as antique brass and black nickel.

And this unusual project has also given John Jackson—and Dynacast—a new way of showing people what can be done with zinc die casting and surface finishes. “If you can deliver something as cosmetically challenging and visually stunning as this in such a short space of time, it really does open up new opportunities,” he says. “I hadn’t thought of using zinc die casting in this way before, and this project shows that we are only limited by our imagination in how we apply it.”