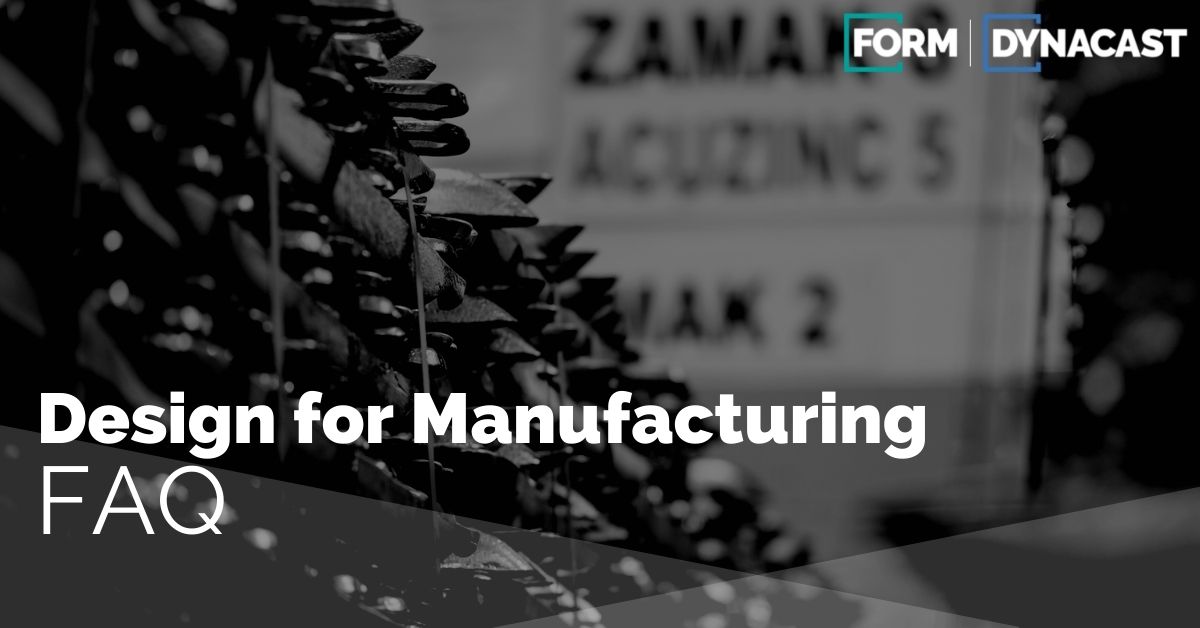 Have you ever wondered what it takes to design parts for the die casting process? Where is the optimal gate location? How thin can the walls be? What features can be added?

Join Dynacast’s Senior Application Engineer, Max Gondek, as he discusses just what it takes to design parts for precision die casting. Max holds a mechanical engineering degree from Purdue and has been in the die casting industry for more than ten years. He’s held positions in product development, project management, application engineering and is an overall expert on design for manufacturing (DFM). He eats, sleeps and breathes DFM—loves learning how things work.

Max Gondek: It is important to collaborate with an engineer as early in the design phase as possible to steer you in the right direction when making big (and critical) changes.

DFM is going to be relatively minor changes that are going to have a huge impact in the part quality, tool life, and just the manufacturing process in general.

Can you show an example of a real-life DFM project?

Max Gondek: In the cross-section of the casting below, the left view shows a large indentation that has been removed. That is a section view of a metal saver, which is utilized to help thin out the wall in thick sections.

On the right side of the view, we reduced the metal saver dramatically. Normally, you want to reduce as much material from the casting as you can, but in this specific example, removing too much material would actually create a thin-wall condition on the inside edge of the casting, leading to possible flow-related issues, or worse, a hole in the casting

What we ended up doing is really reducing the depth of the metal saver, as well as increasing the wall thickness to make it more uniform. This gave us better casting quality and material flow. It also improved our tool life and gave us some areas to make some ejector pin pads, which are those small circles.

This is a great example of such a minor change that had a dramatic impact.

Does DFM change the function of my part?

Max Gondek: The short answer is no.

I have another example of a part design that was in pretty good shape when we got it. A lot of the design elements we needed were already included and we just needed to continue it and push it over the finish line.

The image on the left is the customer model. There are a lot of different metal savers designed into this casting, and it’s a relatively thick area. The steel that we would have needed to create the savers would be pretty small and very delicate. Ultimately, we were concerned about the longevity of the tool. On the right, we decided to remove the four, smaller, pyramidal-shaped metal savers. We also took the remaining metal savers and increased draft and radii, as well as added those ejector pin bosses again.

This is just another simple example of tweaking the customer’s part in a way that is much better for the die casting process and, in this case, had no real impact on product function.

Do you have a dedicated team to assist with DFM?

Max Gondek: Yes. We do this stuff every day. Our day jobs are DFM and analyzing castings for customers. We love getting in early and love collaborating on part design.

Our team looks at every design, and depending on alloy, part size, quality requirements, etc., we make recommendations that work best for you, as well as the die casting process. We utilize a wide variety of expertise across all our facilities—we have a multi-faceted team that is always going to be working together.

Once a week, we get our engineering managers together to review the designs we’re working on to perfect them and work towards a solution that not only works for one plant, but also Dynacast as a whole. Also, we utilize casting simulation software (MAGMA) to help get us to the final process.

In die casting, the steel tool is filled with molten material—aluminum, magnesium, zinc—at a high velocity. And the outside of the casting solidifies first, working its way inward. As it solidifies, the casting alloy shrinks volumetrically, leaving you with shrinkage porosity. This is one of the main defects you’re going to see in die casting. In essence, the part is left with small pores resembling a sponge.

To avoid porosity, we recommend (and this is a very simplistic example) to add weight savers, or metal savers, to remove as much of that mass as you possibly can.

The end goal is to have as close to uniform wall thickness as possible because that’s going to allow for a uniform solidification pattern, which is going to, in turn, decrease as much of the shrinkage porosity as possible. In our example below, we’ve removed material from the top of the part, the bottom of the part, and we’ve added some metal savers to the extrusion in the front to try to thin it out, as well.

Removing weight is relatively simple, but it has an enormous impact to part quality, and in turn impacts production—reducing cycle time dramatically. Die casting is generally limited by how quickly you can make a part, removing material from the casting, this allows parts to solidify quicker and leads to more shots per hour, and in essence, reduces part cost.

Also, from a pure volume standpoint, you’re using less molten material (aluminum, magnesium, zinc), so you have less material costs built into your part, which, again, is a huge economic benefit.

How does draft impact part design in die casting?

Max Gondek: Once the general shape of the part is done, and it is thinned out a little bit, draft is the next crucial thing you need to add.

The best analogy I have for draft, which is becoming less and less relevant, is the old-school ice cube trays. You pour water in it, stick it in the freezer, wait awhile, take it out, and then you bend and crack the tray, watching the ice cubes fall out. When you crack those ice cubes out, though, they’re not perfect squares. The ice cube tray has tapered edges, or draft, in the mold to allow the ice to come out.

The exact same logic applies with die casting. If you had no draft and all your walls were perpendicular, the casting would stick to the tool. You wouldn’t be able to get the part out of the tool and continue to make castings.

So, we’ve slimmed our part down, we’ve added the draft, and now, we need to assess adding radii, fillets and rounds.

What are the advantages of fillets and radii in part design?

Max Gondek: Fillets and radii break the sharp corners of the die casting. The rule of thumb is that you cannot have a sharp corner on a die casting other than the parting line (where two pieces of tool steel come together).

What if my part keeps failing testing? How can DFM help?

Max Gondek: Let me walk you through a common mistake most people make when designing for die casting. Imagine putting your part through finite element analysis (FEA), and having it fail due to not meeting structural requirements. One thing most people try to do is they try to make it thicker. They add more mass, and in turn, they increase the radii and wall thickness. Thicker is stronger, right? No.

The best thing you can do if you’re trying to improve upon casting strength is to add ribs, webs, kind of structural aspects of that nature.

What is the function of ejector pin bosses?

Max Gondek: So, as I mentioned before, you have draft, it helps the casting come off of the tool, but one of the things that actually needs to push the casting off are called ejector pins.

These are going to be, you know, steel pins in the tool steel that can actually actuate and move the casting off the tool. So, they will physically push the casting off, which allows it to be ejected, grabbed with a robot, and then, you know, utilized during any post-processing. Some castings are designed really well from the start, and they don’t need anything fancy. Other castings, though, may need to add a specific feature just for ejector pins.

The image in the top right can show, maybe, an ejector pin kind of boss that’s added to the side, that allows you to push. Generally, you want to push on the top of a rib, not necessarily on, like, the base of a box. If you have something with, like, a lot of heat sink fins, a lot of times we’re going to add ejector pin bosses on those as well, as you see in the bottom right. So, those are, again, going to give us an area to push off, push the casting off of the tool steel.

One thing we like to do at Dynacast is, any movable component in die casting’s going to have some aspect of variability to it. You know, we’re talking a couple thousandths here, but still, there’s some variability to it, and what we like to do is actually make our ejector pin bosses slightly recessed. We go about, you know, five-thousandths or so below the actual surface that needs to be utilized. This allows a little bit of variation in the ejector pin, which won’t impact the actual casting function.

What is the importance of tolerances in the die casting process?

Max Gondek: Getting your design figured out as early as possible is really crucial. You may have a beautiful CAD model. It looks great. It has all the draft, rounds, and fillets, but we need to make sure that it meets the tolerance requirements as well.

On our end, we can help with parting-line design, tooling configuration, temperature variation and analysis, but there is a lot of work that has to be done on the part geometry side that impacts the dimensional side, like linear shrinkage. You also have to understand the limitations of die casting.

From the tolerancing side of things, if you’re trying to reduce machining, die casting is a great solution to meet required tolerances.

Check out our tolerancing chart on our website here.

How does material play into Design for Manufacturing?

Max Gondek: Material is just as important in the DFM process as any of the other steps mentioned previously. And material choice plays a big role in the design of your component. Without going into too much detail, the best place I can point you is our metal selector tool. I highly, highly recommend this tool. It allows you to toggle in real time between thermal conductivity, tensile strengths, weights, densities, etc. You can really figure out what alloy makes the most sense for you and your project.

If you are interested in learning more from Max, download the full, on-demand DFM webinar Design for Manufacturing: A critical step for successful production here.

Interested in learning more? Fill out the form below to access our free on-demand webinar, "Design for Manufacturing: A Critical Step for Successful Production."